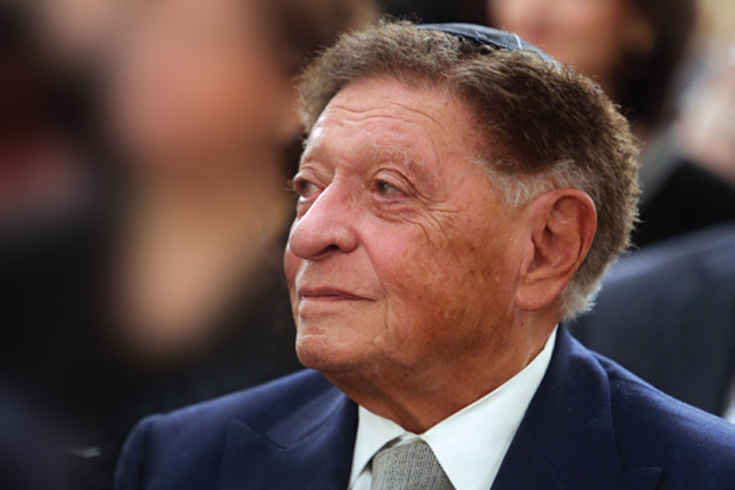 With the passing of Mr. Shmuel (“Sami”) Rohr one year ago, the Jewish people lost one of its most extraordinary sons.

And I lost a partner, a mentor and, above all else, a dear friend.

History will record that Don Sami – as he was known after his years of residence in Bogota, Colombia – was a man who expressed his love of Judaism through a dizzying range of philanthropic activities. Across the world, from the rugged mountains of Montana to the desolate wilderness of Siberia, in cities as distant as Santiago, Chile and Dresden, Germany, there is scarcely a Jewish community that did not benefit from his vision and his generosity. Indeed, many of these communities were all but created by him!

And yet the man behind these vast contributions was modest and humble. Don Sami was never a man driven by vanity or status. He did what he did because he loved G‑d, he loved His Torah, and he loved His people. No more, no less.

Frequently, I'd arrive in my office in the morning to find that Don Sami had left me a series of messages through the night

It was because of this that Don Sami's love of the Lubavitcher Rebbe’s shluchim, the legendary men and women who sacrifice their lives to serve the Jewish people, no matter how tough the circumstances, knew no bounds. He saw in their commitment nothing less than the future of the Jewish people.

With his family’s support shluchim achieved more and more each year, yet Don Sami never wanted to step into the limelight. It was only after decades of involvement in the growth of Chabad-Lubavitch worldwide that he finally agreed to speak at the International Conference of Shluchim, and then, too, only because his once very distant 80th birthday to which he had for years deferred my entreaties had finally arrived. As a man of his word, he was ‘forced’ to attend. In delivering one of the most impressive speeches I’ve ever heard, we were reminded that he was a man of deep learning as well as a man of boundless kindness. 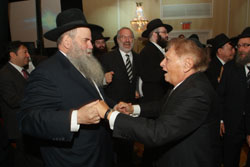 Over the years, Don Sami and I would regularly meet for lunch to discuss “business.” Over a meal of fish followed by gooseberry liqueur, we would run through a laundry list of present and future projects. I can still hear his gentle voice replying decisively to my requests: "Gemacht," he would say. Done; on to the next one. Then again, "Gemacht." And again. And again.

As he became older, Don Sami could have easily stopped and said, “I’ve accomplished enough, let me slow down, let me rest and leave it to others.” Instead, he assumed responsibility for entirely new budgets and projects ­–­ and world Jewry was the richer for it. I will never forget when I visited him in the hospital just days before he passed away. His first words to me were, “Nu, Rabbi Kotlarsky? Did you bring me some new ‘business’ today?” It took all my power to contain the flood of tears threatening to burst forward in reaction to Don Sami’s utter selflessness.

How To Give: Don Sami's Noble Example

Working as closely as I did with Don Sami, I learned some unforgettable lessons from him. To mark his first yahrtzeit, I’ve attempted to distill some of those lessons, which I offer here in the hope that they will inspire future generations of Jewish philanthropists.

Don’t just stand there, do something! When the Jews of Bogota, Colombia, needed a Chabad representative, Don Sami brought one. When the Jews of the former USSR finally tasted freedom, Don Sami anticipated their need for community and set the process in motion. When he saw the potential rebirth of Jewish communal life in the Germany of his childhood, he forged ahead and established Chabad Houses in dozens of cities there. Feasibility committees, news releases, and all the other appendages of modern philanthropy were not for him. Don Sami simply rolled up his sleeves and made it happen – leading every step of the way.

Invest wisely. Ever the entrepreneur, Don Sami had an instinctive feel for those causes that would obtain the best results. He did not believe that charity was a black hole and always invested with a plan. If he was funding a new Chabad center, he wanted to ensure its long-term viability, with local support picking up where he left off. In initiating and sustaining Jewish growth in the Former Soviet Union, he took to heart the axiom “buy low, sell high.” He had done his due diligence and knew how much there was to accomplish there.

Invest your SELF. Don Sami would pray for the success of “his” Chabad centers, and thought about them when he couldn’t sleep during the night. He had a gift for grasping the “little things” that make a community go ‘round, like how a hearty cholent could do wonders for growing synagogue attendance. He called the Shluchim directly and was never shy about sharing his ideas. Frequently, I'd arrive in my office in the morning to find that Don Sami had left me a series of messages through the night, eagerly and thoughtfully outlining his views on how we could achieve even greater successes. Along with his heard-earned resources, Don Sami invested something even more important – his heart, his mind and his soul.

There is nothing sweeter than modesty. Entire communities were dependent on Don Sami, but trying to express public gratitude to him was fraught with risk. He’d push back, saying, loz op di narishkeiten, or, “cut out the silliness.” As I repeatedly discovered, trying to get Don Sami and his family to accept some of the credit for their munificence was harder than pulling teeth. My only trump card, which allowed me a modicum of success, was also related to helping others: "How else will others ever invest similarly?," I’d ask. Or: "When they grow up, your grandchildren will need to know!" 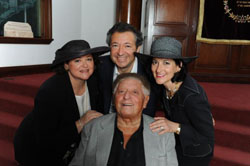 No pain, no gain. During one particularly rough economic period, I received a call from Don Sami. "Are you upset with me?" he asked. "I haven't heard from you in a long time." I told him that I'd been reluctant to bother him with charitable matters when he was overwhelmed by business concerns. "That's for me to worry about," he reassured me. To those close to him he’d often say, "It’s not a big deal to give when things are going well. The real test is to give even when things are rough." Throughout his life, he made sure to contribute at least ten percent of his earnings to charity. But during this past decade, when things slowed down for so many, standing by his long-term commitments meant far exceeding that amount. Don Sami did so happily, grateful for the opportunity to give of himself to serve G‑d and His people.

Be grateful to give. One of Don Sami's most admirable traits was his kindness to people – despite the ceaseless stream of requests he received. He never made me feel bad for asking him again and again and again. To the contrary, he would always express his thanks to me for bringing him more “business.” And even if he was unable to do something or other, he still always found something good to say to make you feel better.

Never be satisfied. Don Sami had an insatiable desire to do more. What we had done in the past was good, and what we were doing at any particular moment was also good, but he was always pushing for more. And he made sure that his children and grandchildren were schooled in the same spirit of commitment, so that they would carry on his efforts after he was gone.

A Life of Devotion

Don Sami’s eighty-six years on this earth encapsulated the joys and tragedies of the Jewish people ­– he knew only too well how close he came to perishing during the Nazi persecution – instilling in him a love of yiddishkeit and for his brethren worldwide that never wavered.

He would tell me how much pleasure he received from hearing about the small communities that grew literally from nothing due to the perseverance and devotion of Shluchim whom he had enabled. They may have been physically distant, but they were near his heart. They were in need, and he was there to help.

Now that he is gone, there is never a day that I don't think about him. I miss his goodness, his Torah wisdom, his energy, his humor, and his modesty with all my heart. And I thank G‑d for having given me my friendship with Don Sami.

I would like to conclude by saying that Don Sami was one of the most incredible people I’ve known, and his name will go down in history as one of the greatest of our century.

I would like to say that. But I know what Don Sami's response would be: loz op di narishkeiten. “Cut out the silliness.”

May his memory be for a blessing and inspiration forever.